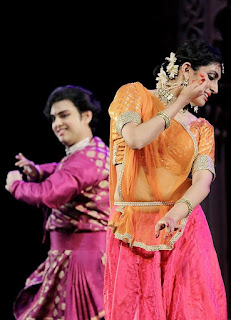 Ridha walked back into the class with her friend of five minutes. Her friend, who shall help her survive this dance class. She settled down on a worn out yoga mat facing him. She had never seen anyone practice. Perform, yes. Practice, never.
Her thoughts were broken by the sound of his ghunghroo. Instead of slowly picking up pace, he began full throttle.  She was shocked, terrified rather. The rushing beats being produced by his feet created a chaotic noise at first, but soon formed a pattern. Almost as if someone was chanting a mantra with a great urgency.
With the rising tempo, Ridha felt a palpable energy within her too. She didn’t know of this approach to dance at all. She had always interpreted it as something graceful, and delicate. And here was a man, who looked as if he was preparing for war with his eyes tightly shut, and possessed by some inner calling.

Feeling the adrenaline rush through her, Ridha jumped to her feet. Without thinking, she breaks into a footwork struggling to match up to his accelerating speed.
Posted by Unknown at 02:34